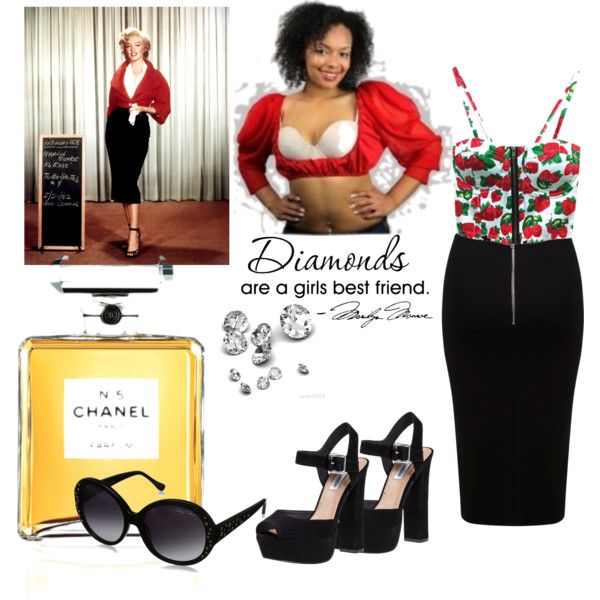 It’s Marilyn Monroe season at the moment – the gorgeous icon is being celebrated with a season of Marilyn Monroe films at London’s BFI and the reissue of The Misfits, originally released in 1961, today.

If you want to channel your inner Marilyn, here’s what you’ll need.

Marilyn’s dresses are the stuff of  legend everybody remembers the iconic pleated white frock that exposed her modesty 9and ended her marriage) over the grate in The Seven Year Itch, and it would be impossible not to mention the sequinned dress she had to be sewn into to sing “Happy Birthday Mr President”. Back in the eighties, Madonna stole Marilyn’s style and paid homage in a replica of the pink dress she wore in Gentlemen Prefer Blondes. Find your signature dress, add diamonds or fake fur, strap on some heels and work that look!

The classic pencil skirt and red jacket that inspired our look is from 1953’s Niagara –  the film in which she wore the red dress that inspired the quote “Listen. For a dress like that, you’ve got to start laying plans when you’re about thirteen.” We’ve teamed it with a strawberry patterned strappy top from Top Shop to make it a bit different from the iconic image, and added Chiffon Volume Wingz – but this is a look that you can really make your own; so simple and elegant, a true Marilyn classic.

If “Men don’t wear passes at girls who wear glasses” – they did after seeing Marilyn in 1953’s How to Marry a Millionaire with Lauren Bacall and Betty Grable. Marilyn wore cat style specs but was also known for her love of big sunnies – it’s an easy one to copy if you don’t have the boobs and booty for the skin tight dresses!

Jeans and a white shirt

It’s not all about the statement frocks for Marilyn, that woman could work jeans and a white shirt and still look utterly gorgeous. Don’t believe me? Check out ‘”River of no Return” from 1954, where she’s wrestling with Robert Mitchum – or The Misfits where she’s trying to save the poor horses from being turned into dog food. Marilyn still manages to look amazing in pigtails, wearing jeans. You can see for yourself when the film’s re-rereleased!

It was all she wore in bed….need we say more?