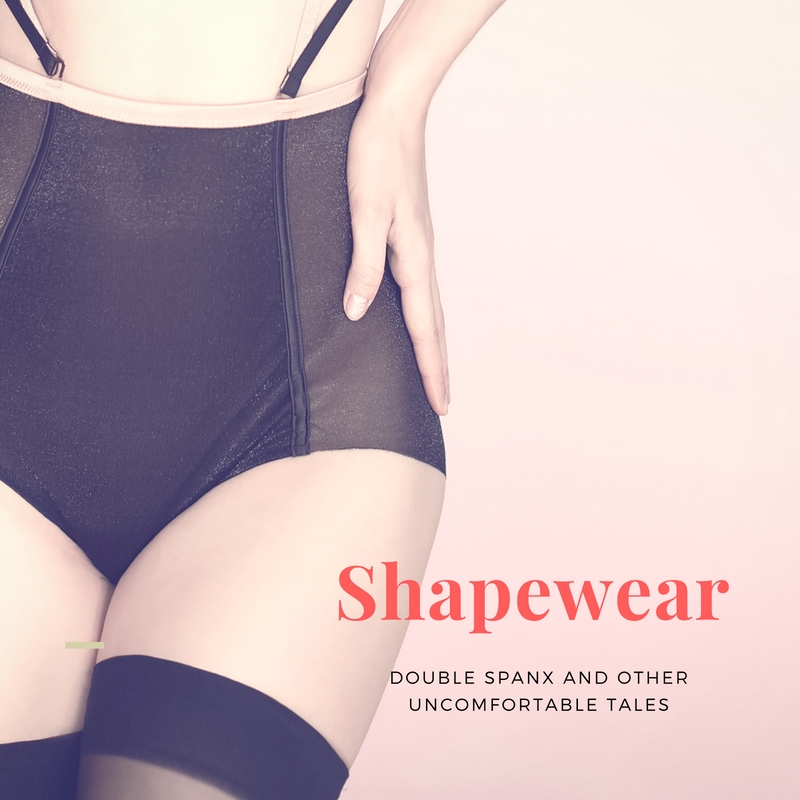 I can’t really see the double Spanx trick catching on, but people have been trying out Kim Kardashian’s infamous shapewear trick and posting the results, which made me think – what have we all done in the name of body shaping and trying to look good for a big occasion?

Here’s what happened when someone with a self-confessed ‘podge’ tried wearing two pairs of Spanx under her dress for a day.

It comes to something when the best part of your day is sitting on the toilet, that’s all I’m saying.

There’s nothing OF Kim Kardashian, either. I’d be very surprised if she noticed much more of a difference than this lady did!

So, we’ve covered Spanx and ‘pull it all in pants’ – who hasn’t given those a try for a big occasion? Even if you’ve got barely anything to pull in, shapewear can be lovely under tight or revealing clothes as it gives you a nice smooth line and hides things like big knicker lines. Although the pushed up flesh has to go somewhere and that usually means over the top of the waistband…

What about push up bras? Apparently, the push up bra has had its day; in the 90s they were ubiquitous and the ‘Hello Boys’ advert has gone down in history, but now the subtle contouring and enhancing of the balconette bra is more in favour. Unless your cup quite literally runneth over, in which case anything less than a full cup is inadvisable. The effect of a balconette bra on an ample bosom tends to be the four boob effect, which isn’t flattering on any cup size and what’s more, it’s REALLY uncomfortable.

Hands up if you’ve ever had to readjust a bra position while you’re out and about? You know what I mean, right?

It’s probably for the best that padded Wonderbra type lingerie is out of fashion because there are perils associated with wearing construction underwear like that. Someone I know, of course I’m not at liberty to divulge who, was once throwing some shapes to some nineties tunes in a club when she looked down and saw, with horror, that her padding had escaped. She didn’t want to draw attention to herself or her lopsided boobs, so she kicked the offending item across the dance floor as hard as she could, and then went off to the Ladies to level. The runaway padding has to come second only to escaping under wires for bra-related trauma.

If you have big thighs, you’ll know just how horrid summer can be unless you wear leggings/jeans all summer long or invest in the quaintly named ‘comfort shorts’. Some of them are much better than others. The properly designed shorts that are made for actual big girls are lovely and cool (shout outs here to The Big Bloomers Company and Big Tights Company who make lovely long legged anti chafing knickers with lace on and everything) but badly made versions are hideous. The edges of the legs roll up so you’re constantly hoiking them back down, and considering where they sit on your thigh, it’s a tad conspicuous. Invest in some good ones and you won’t get sweaty or uncomfortable – buy cheap ones and it’s like the least comfortable tights you’ve ever worn. And we all know how horrid tights can be when the seams don’t sit straight or the crotch keeps falling down…

Lastly, not shapewear but arm coverage…some people wear Wingz to cover up their arms and they are fantastic for this – before Michelle Ellis came up with the genius idea of Wingz, we all had to wear shrugs or granny cardis to keep our arms covered. Shrugs look gorgeous when you stand still but if you have even slightly rounded shoulders, you’ll spend the whole time pulling them back up. It’s so tempting just to take the annoying things off! No such problems with Wingz, they are designed to stay put and cover your shoulders and arms for whatever reason you choose.

Oh, and we have a new design…our lace Wingz are now scalloped edge, making an already pretty design even cuter, we think.

Do you have any shapewear horror stories? We’d love to hear them.