The dust may have settled after Michelle and Steve’s ‘Den’ appearance but they are by no means slowing down. On the contrary, they are both busier then ever finding themselves spending more and more time attending to their growing empire!

My next few posts on here will cover all the attention they have been getting! Also, i have just comletely re-designed FatPhrocks’ sister site Wingz Fashion, So look out for a full write up of the new site and all of its features.

An article from The Record: 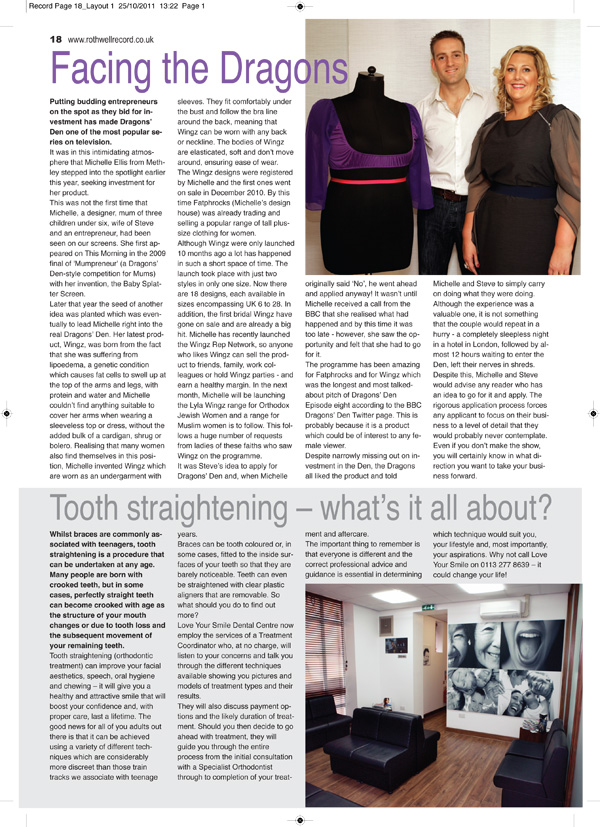 Putting budding entrepreneurs on the spot as they bid for investment has made Dragons’ Den one of the most popular series on television. It was in this intimidating atmosphere that Michelle Ellis from Methley stepped into the spotlight earlier this year, seeking investment for her product. This was not the first time that Michelle, a designer, mum of three children under six, wife of Steve and an entrepreneur, had been
seen on our screens. She first appeared on This Morning in the 2009 final of ‘Mumpreneur’ (a Dragons’ Den-style competition for Mums) with her invention, the Baby Splatter Screen. Later that year the seed of  another idea was planted which was eventually to lead Michelle right into the real Dragons’ Den.

Her latest  product, Wingz, was born from the fact that she was suffering from lipoedema, a genetic condition which causes fat cells to swell up at the top of the arms and legs, with protein and water and Michelle couldn’t find anything suitable to cover her arms when wearing a sleeveless top or dress, without the  added bulk of a cardigan, shrug or bolero. Realising that many women also find themselves in this position, Michelle invented  Wingz which are worn as an undergarment with Facing the Dragons sleeves. They fit comfortably under the bust and follow the bra line around the back, meaning that Wingz can be worn with any back or neckline. The bodies of Wingz are elasticated, soft and don’t move around, ensuring ease of wear. The Wingz designs were registered by Michelle and the first ones went on sale in December 2010. By this time Fatphrocks (Michelle’s design house) was already trading and selling a popular range of tall plussize clothing for women.

Although Wingz were only launched 10 months ago a lot has happened in such a short space of time. The launch took place with just two styles in only one size. Now there are 18 designs, each available in sizes encompassing  UK 6 to 28. In addition, the first bridal Wingz have gone on sale and are already a big hit. Michelle has recently launched the Wingz Rep Network, so anyone who likes Wingz can sell the product to friends, family, work colleagues or hold Wingz parties – and earn a healthy margin. In the next month, Michelle will be  launching the Lyla Wingz range for Orthodox Jewish Women and a range for Muslim women is to follow. This follows a huge number of requests from ladies of these faiths who saw Wingz on the programme.

It was Steve’s idea to apply for Dragons’ Den and, when Michelle originally said ‘No’, he went ahead and applied anyway! It wasn’t until Michelle received a call from the BBC that she realised what had happened and by this time it was too late – however, she saw the opportunity and felt that she had to go for it. The programme has been amazing for Fatphrocks and for Wingz which was the longest and most talkedabout pitch of Dragons’ Den Episode eight according to the BBC Dragons’ Den Twitter page. This is probably because it is a product which could be of interest to any female viewer. Despite narrowly missing out on investmentin the Den, the Dragons all liked the product and told Michelle and Steve to simply carry on doing what they were doing.

Although the experience was a valuable one, it is not something that the couple would repeat in a hurry – a completely sleepless night in a hotel in London, followed by almost 12 hours waiting to enter the Den, left their nerves in shreds. Despite this, Michelle and Steve would advise any reader who has an idea to go for it and apply. The rigorous application process forces any applicant to focus on their business to a level of detail that they would probably never contemplate. Even if you don’t make the show, you will certainly know in what direction you want to take your business forward.