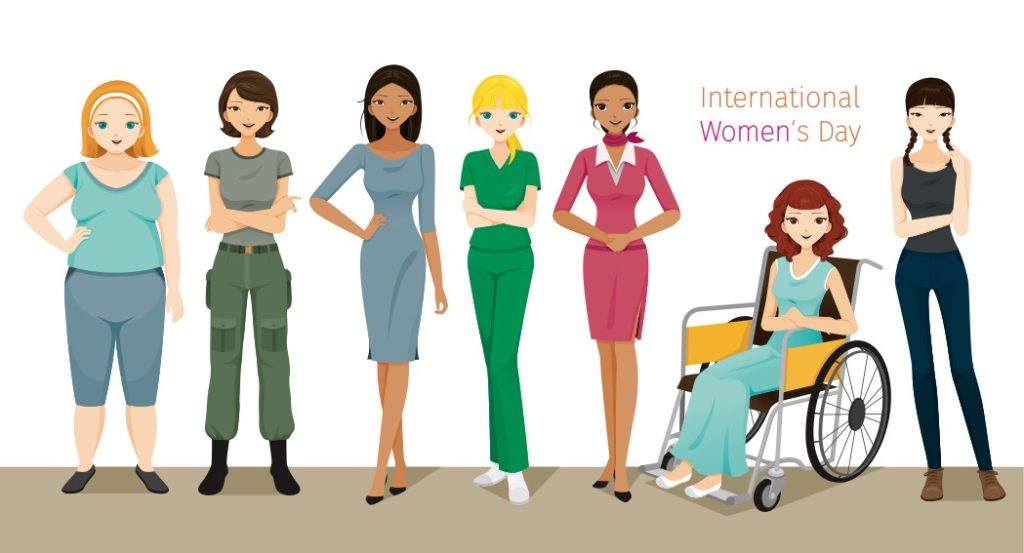 We’re bringing you the blog a day early this week, because it’s International Women’s Day 2018 and we wanted to celebrate the ways in which fashion supports women, and feminism.

Although there’s still a way to go, with runway models talking about being judged as ‘too fat’ when they are way smaller and thinner than most of us were in our school days, and the fashion industry still being slow to cotton on to ‘fast fashion’ being something that’s not good for the (mostly) women involved in producing it, we can see that the icons and important people in the fashion world are trying to make a difference in their own way.

Here are a few ways in which fashion – and indeed the fashion industry – making a statement right now, and in the past.

The original feminists, the suffragettes, used colour to help identify themselves with the women’s suffrage movement when they weren’t taking part in rallies and demonstrations. They used green, white, and purple to show that they were part of the movement, as far back as 1908. To this day, colour has been used to make a point – white roses at the BAFTAs and of course the black dress code for women to show support for #metoo. Colour will always be a way to show solidarity in a very simple way.

We mentioned back in our blog last year Prabal Gurung sent models down the runway in a selection of political tees in 2017. The slogans included ‘The future is female’ and ‘Our bodies, our minds, our power.’

Missoni used the runway in the same way as Prabal Gurung – she sent models down the runway wearing their statements on their heads though. Designer Angela Missoni added a speech to the catwalk show designed to unite and inspire.

“In a time of uncertainty, there is a bond between us that can keep us strong and safe: the bond that unites those that respect the human rights of all. Let’s show the world that the fashion community is united and fearless.”

To show their commitment to marking International Women’s Day 2018, influential fashion designers got together with Net-A-Porter to create a collection of themed t-shirts – with all proceeds going to the charity Women for Women International.

Ganni, Off-White, Rosie Assoulin, Chloé, Stella McCartney and Bella Freud designed for the event, with celebrity endorsements from Dakota Fanning and Nicole Kidman. There are none left, so they clearly did their job.

Fashion is often derided as just a superficial thing, not of any substance. Of course, there’s no denying that we have a long way to go before fashion as a whole can be considered representative of equality, whether that’s for women, people of colour, people who identify differently in gender and those who are differently abled. But there’s no denying that fashion can be a powerful force for change and has the ability to support International Women’s Day just as effectively as any other industry, including the media.

Happy International Women’s Day 2018 from all at Wingz