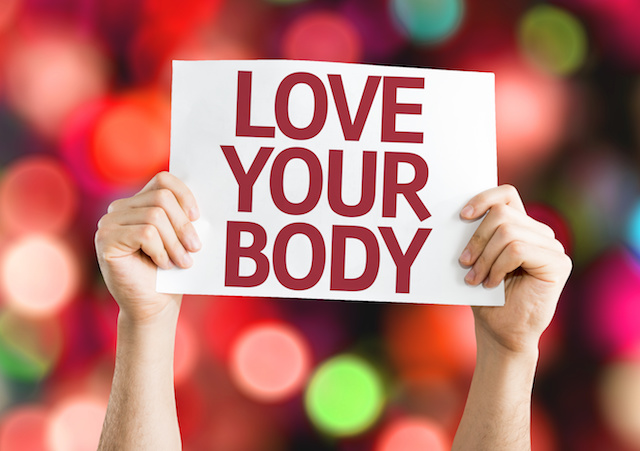 Body Confidence It’s something that’s tricky to attain in a world that sets women against each other and encourages us to feel too fat, thin, old, not feminine enough, too feminine…you get the picture.

So, we thought we’d put together a few awesome quotes from people who have their full body confidence quota and bring them to you for those days where you just don’t feel as confident in your body as you could.

Salma Hayek nails it for us; body confidence comes from inside and when you realise that the only person who matters is you, it’s incredibly liberating.

“People often say that ‘beauty is in the eye of the beholder,’ and I say that the most liberating thing about beauty is realizing that you are the beholder.”

One of the loudest advocates for body confidence at any size is the striking Tess Holliday. She’s had a well-documented struggle with her weight, and looks, and is now recognised as one of the best known plus size models who really IS plus size. She says;

“There are so many people who think that being a plus-size model, that there’s something wrong with it, or that I must be unhealthy or that I’m promoting an unhealthy lifestyle.

“I did combat that for a while, and argue with people about that, but ultimately it’s kind of like banging your head into a brick wall. If people are committed to that theory, I’m not going to change their mind. But there are people who look like me, and feel like me, who feel like they don’t have a voice, and that encouraged me to keep going.”

Marilyn Monroe wasn’t just one of the world’s most beautiful women, she was also a talented actress and an intelligent, deep-thinking woman, Marilyn is known for many quotes about beauty that still resonate to this day. One such quote makes you think – the big beauty and diet companies tell us that our worth is measured by what they sell us to change our bodies but Marilyn didn’t think so. She said;

“Beauty and femininity are ageless and can’t be contrived, and glamour, although the manufacturers won’t like this, cannot be manufactured.”

As well as her outspoken views on feminism, gender and politics, activist Gloria Steinem had something to say on the subject of body image. If you think about the men you know and the women you know, although things may be headed in the wrong direction for men too, do you recognise the truth in this?

“If you ask men about their body image, they will tell you they look better than they do. And if you ask a woman, she’ll tell you she looks worse”

You know you actually look great, don’t you?

You might wonder what a famous Supermodel like Cindy could possibly know about lacking confidence – but you’d be surprised. If getting older is something that plays on your mind, Cindy has a few inspiring words;

“In my thirties and even early forties, I could kind of still fake it. But then I started to worry that I was disappointing people, that I wasn’t delivering the ‘Cindy Crawford’ that they expected. But I’m past that now. I can’t even smoke-and-mirrors the Cindy from my twenties anymore. And that’s okay.”

Comparing ourselves and our bodies to other women is something many of us are guilty of. Tyra Banks has seen her share of aspiring models but believes that beauty isn’t cookie cutter predictable.

“Girls of all kinds can be beautiful – from the thin, plus-sized, short, very tall, ebony to porcelain-skinned; the quirky, clumsy, shy, outgoing and all in between. It’s not easy though because many people still put beauty into a confining, narrow box…Think outside of the box…Pledge that you will look in the mirror and find the unique beauty in you.”

Laverne is well known for being an LGBT advocate and is vocal about transgender issues. Although this quote isn’t about beauty and body image specifically, transgender people have to deal with body issues at the same time as misunderstanding and sometimes downright disapproval from others. Laverne encourages trans people to be proud of who they are, saying;

“It is revolutionary for any trans person to choose to be seen and visible in a world that tells us we should not exist.”

Plus size model Crystal says what a lot of us think – we girls need to stick together, big each other up and make each OTHER feel good.

“We women are a lot more powerful if we see ourselves as fighters on the same side. But it’s easier to judge others – their choices and their bodies – than to think about the struggles we share.”

Next time you feel as if your reflection is the most important thing about you, your dress size defines you or a lack of confidence threatens to stop you doing something, read this.

“What if you wake up some day, and you’re 65, or 75, and you never got your memoir or novel written; or you didn’t go swimming in warm pools and oceans all those years because your thighs were jiggly and you had a nice big comfortable tummy; or you were just so strung out on perfectionism and people-pleasing that you forgot to have a big juicy creative life, of imagination and radical silliness and staring off into space like when you were a kid? It’s going to break your heart. Don’t let this happen.”

Last but not least – we don’t have a source for this one but it’s so, so true.

Be kind to yourself….